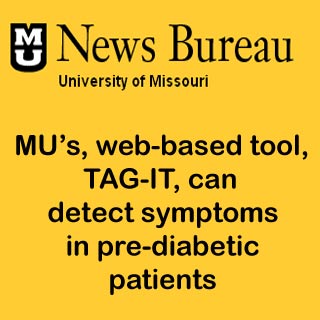 A University of Missouri researcher has developed a web-based screening tool that has the ability to detect those at risk of developing undetected hyperglycemia, impaired fasting glucose (IFG) and undiagnosed diabetes. It is stated that many pre-diabetic Americans are not aware of the risk that they are facing and an estimated one third of diabetic Americans don’t know that they suffer from this disease.

It is believed that if the symptoms of these diseases are detected early on, then treating it may get easier, which in turn reduces the chances of developing diabetes or any other diseases.

Richelle J. Koopman, assistant professor of family and community medicine, MU School of Medicine, says that, “Diabetic risk factors are not equal and assessing a combination of risk factors can be confusing. A tool that weighs the relative contributions of multiple risk factors and creates an overall risk score will help clinicians decide which patients to screen for diabetes. The tool we have developed is easy to use and the screening can be done with pencil and paper. Patients can do it at a health fair or a physician’s office.”

The Tool to Assess Likelihood of Fasting Glucose Impairment (TAG-IT) is specially designed to make use of the factors that are either self-reported or easily measured. The TAG-IT tool keeps in mind six essential factors; namely, age, BMI, sex, measured high blood pressure and family history resting heart rate.

Koopman says that, in the United States, the average age for diabetes diagnosis is 46 years. But some people may develop pre-diabetic conditions even before the mentioned age. It is estimated that around 57 million Americans suffer from IFG. Type 2 diabetes is believed to have become very common in the younger generations, thus it is stated that an availability of a screening tool is very beneficial to detect undiagnosed diabetes and IFG in them.

He further says, “There has been increasing evidence that prediabetic states are associated with diseases and other complications, and strategies that prevent diabetes in those with prediabetes are effective.”

He concludes by saying that the TAG-IT measuring device could prove to be very helpful to the physician in calculating the level of risk faced by the patient. He also says that, this tool may aid the respective at-risk patient in controlling their behavioral pattern. Being a web-based screening tool, TAG-IT has the capability to increase awareness in people and urge them to bring about a change in their lifestyle, as recommended by their respective physician.

The study is published in the Annals of Family Medicine.

Importance of Exercise and Facing the Demon called ‘The Work-Out’