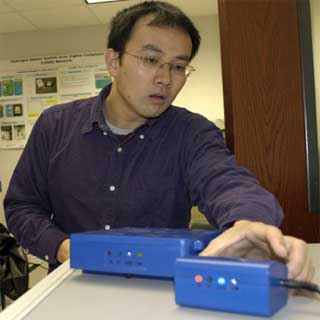 Engineering researchers of the University of Florida have built a model baby monitor that concentrates on the baby’s breathing. The crib-attached monitor alerts parents on their portable unit, in case the baby’s chest stops moving.

It is said that American parents buy innumerable baby monitors every year, however they have the ability to only transmit sound or video images. Both of these are beneficial, but they require the parent to either listen to or watch the videos. There are believed to be more baby monitors in the market that monitor the baby’s movements and breathing, however, the latest monitor is believed to be the first to use wireless technology.

Jenshan Lin is a UF professor of electrical and computer engineering and also the lead investigator of the Doppler radar technology, used in the monitor. The baby monitor uses Doppler radar to scan the in-and-out respiration movement of the baby’s chest.

Lin says, “It’s the same Doppler radar that police use to catch speeders, but in our case, we don’t measure constant speed, but rather back-and-forth motion — sort of like vibration. That’s the fundamental principle of this technology.”

They developed a small-book-sized device that is mounted on the crib, similar to a standard monitor, as seen in the image. They even designed a remote station with different color lights. These lights indicate the battery life of the remote station, the status of the baby’s vital signs and confirming the station’s wireless connectivity to the baby crib monitor. On detecting a decrease or stop in the baby’s breathing activity, the remote station gives out a loud alarm and flashes a red light to alert the parents.

According to Lin, the monitor’s signals are very low power and thus are not harmful to either the baby or the parents. He states that a standard cell phone discharges about one watt of power, while the Doppler radar releases just about one ten-thousandth of a watt of power.

Lin says that the future versions of the baby monitor, using higher frequency signals, will be capable of detecting the baby’s heartbeat.

Their discovery is published in the IEEE Microwave Magazine issue.