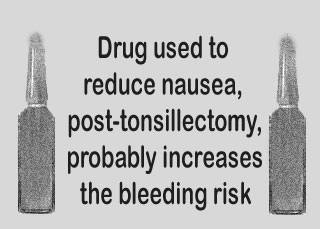 A latest study states that the use of dexamethasone helps in the reduction of nausea and vomiting after tonsillectomies in children; but also, apparently, brings with it a higher risk of postoperative bleeding.

Tonsillectomy is believed to be a very frequently performed surgical procedure in American children every year. Postoperative nausea and vomiting (PONV) is said to be a known effect in children. The steroid medication dexamethasone is the recommended drug to curb these complications. However, according to the study, the amount of drug dosage to avoid PONV symptoms, and the side effects of dexamethasone are not clear yet.

A study was conducted on more than 200 children undergoing elective tonsillectomy at a Switzerland hospital. Christoph Czarnetzki, M.D., M.B.A., of the University Hospitals of Geneva, Switzerland, and his colleagues conducted this study in an attempt to uncover the amount of dexamethasone dosage needed to lessen the risk of PONV at 24 hours after tonsillectomy. For the study, the children, after the start of anesthesia, were randomly either given dexamethasone (0.05, 0.15, or 0.5 mg/kg) or placebos intravenously. Ibuprofen and acetaminophen were provided as a postoperative pain killer. After the surgery, for ten days, they were kept an eye on.

At least once PONV, within 24 hours after surgery, was experienced by the children:

It’s also said that about 26 postoperative bleeding was experienced by around 22 children:

The authors conclude by saying that more detailed trials are required to either approve or disapprove the findings of this study. They also state that trials of a similar nature in children may prove to be complicated. The current study was discontinued because of safety reasons. The authors further say that dexamethasone, in spite of being a strong antiemetic drug, could probably be used cautiously in children undergoing tonsillectomy.