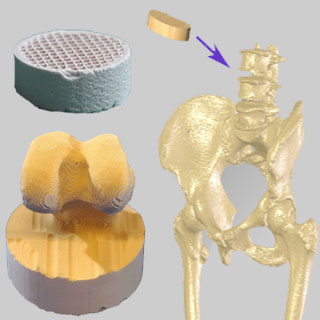 The WMG researchers at the University of Warwick have developed a method of producing synthetic bone, by making use of the techniques commonly used for making catalytic converters for cars.

Dr. Kajal Mallick from WMG and James Meredith, postgraduate researcher, have together developed this innovative technique. They state that this technology can possibly benefit patients undergoing bone implant surgery.

Dr. Mallick says that, “We worked with a Japanese company which manufactures catalytic converters and used their facility to produce samples which we could then test in the laboratory.”

A 3-dimentional honeycomb texture, with uniform pores, is produced by extruding the implanted material through a mould. This material can then be shaped by the surgeon in order to accurately match the defect. After implantation, bone cells will be transported in to the implant and there it begins to form a new bone.

Calcium phosphates are a member of the bio-ceramic group. They are usually utilized in bone implant operations. Dr. Mallick says that, the use of calcium phosphates through this technique has considerably improved the strength and porosity of the implant. He further says that, supposedly, there are no other products presently available in the market which fulfills both these criteria’s.

Since the material used is very strong, it can also be used in spinal surgery, hip and knee revision operations. Interconnected porosity means that the implant quickly gets filled with blood vessels, which aid in a quicker healing process.

Meredith says that, the synthetic bones are believed to be similar to normal healthy bones. They are said to be adequately porous in order to permit the residency of bone cells which leads to formation of a new bone. He further says, he hopes that over time the synthetic bone will resorb, and leave behind a natural bone.

The team of researchers along with the University’s technology transfer office, Warwick Ventures, is on the look out for a potential partner that will help commercialize the technology in the market.

Their findings will be presented at Bioversity 2008, the national university technology showcase event. Bioversity is a part of the biotechnology conference, Genesis 2008, which is organized by the London Biotechnology Network.