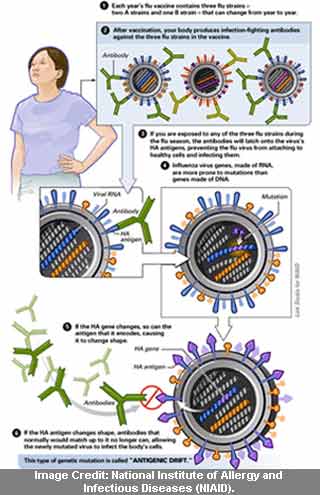 Influenza viruses are known to evade infection-fighting antibodies by continuously changing the shape of their major surface protein. This shape-shifting, called antigenic drift is why influenza vaccines may require to be reformulated once a year. Apparently, influenza vaccines are designed in order to elicit antibodies matched to each year’s circulating virus strains.

Currently, researchers from the National Institute of Allergy and Infectious Diseases (NIAID), part of the National Institutes of Health, are believed to have proposed a novel explanation for the evolutionary forces that drive antigenic drift. The research findings in mice also suggest that antigenic drift could possibly be slowed by increasing the number of children vaccinated against influenza.

“This research elegantly combines modern genetic techniques with decades-old approaches to give us new insights into the mechanisms of antigenic drift and how influenza viruses elude the immune system,” says NIAID Director Anthony S. Fauci, M.D.

Dr. Yewdell stated that, “No one is sure exactly how the antigenic drift of flu viruses happens in people.”

According to the existing theory, a drift seems to occur as the virus is passed from person to person and is exposed to contradictory antibody attacks at each stop. With varying success, antibodies may recognize one or more of the four antigenic regions in hemagglutinin, the major outer coat protein of the flu virus.

For instance, antibodies in person A could raise an attack in which antibodies focus on a single antigenic region. Mutant viruses that happen in person A may escape antibodies by replacing one critical amino acid in this antigen region. Supposedly, these mutant viruses survive, multiply and are passed to person B, where the process is repeated.

Lead researcher, Dr. Jonathan W. Yewdell, M.D., Ph.D. claimed that it is impossible to dissect the mechanism of antigenic drift in people directly. Therefore, Yewdell along with his colleagues turned to a classic mouse model system that had been developed in the mid-1950s at the University of Chicago. However, this model system appeared to have been rarely used.

The team was observed to have infected mice with a strain of seasonal influenza virus that had circulated in Puerto Rico in 1934. Some mice were believed to have been vaccinated first against this virus strain. The team found that these mice seem to have developed antibodies against it, whereas others were unvaccinated.

After infecting the vaccinated and unvaccinated mice with the 1934 influenza strain, the scientists were noted to have isolated virus from the lungs of both sets of mice and passed on these viruses to a novel set of mice. They did this nine times. After the final passage, the researchers were noted to have sequenced the gene encoding the virus hemagglutinin protein.

Sequencing revealed that the unvaccinated mice that lacked vaccine-induced antibodies seem to have no mutated influenza viruses inside their lungs. On the contrary the hemagglutinin gene in virus isolated from vaccinated mice appear to have mutated in a way that increased the ability of the virus to stick to the receptors it uses to enter lung cells. Dr. Yewdell was of the opinion that basically, the virus could shield its hemagglutinin antigenic sites from antibody attack by binding more tightly to its receptor.

He further said that, “The virus must strike the right balance, however. Excessively sticky viruses may end up binding to cells lining the nose or throat or to blood cells and may not make it into lung cells. Also, newly formed viruses must detach from infected cells before they can spread to the next uninfected cell. Viruses that have mutated to be highly adherent to the lung cell receptors may have difficulty completing this critical step in the infection cycle.”

Subsequently, the researchers seemed to have infected a latest set of unvaccinated mice with the high-affinity mutant virus strain that had appeared in the first series of experiments. In the absence of antibody pressure, the virus may have reverted to a low-affinity form and perhaps was once again able to easily infect cells and spread.

“We propose a model for antigenic drift in which high- and low-affinity influenza virus mutants alternate,” says Dr. Yewdell.

In adults who have been exposed to many strains of influenza in their lifetime and, likewise, have a wide range of antibody responses, the virus is observed to be pressured in order to increase its receptor affinity to escape antibody neutralization.

“Our model predicts that decreasing the immunologically naive population—by increasing the number of children vaccinated against influenza, for example—could slow the rate of antigenic drift and extend the duration of effectiveness of seasonal influenza vaccines,” continues Dr. Yewdell.