Scientists have made a revolutionary pill that will prove to be a perfect bliss for the couch potatoes. With studies over studies being made to show how couch potatoes can ruin their health because of their sedentary lifestyles, the ‘Exercise Pill’ might just be the perfect solution for the un-worked out muscles of the lazy people. 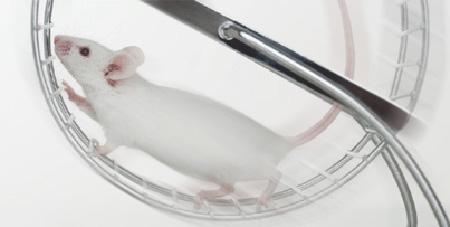 Known as AICAR, the exercise pill burns out the fat and stimulates muscles as though they had been worked out. The only exercise one has to do is pop in the pill in their mouth. AICAR is the creation of scientists from Salk Institute for Biological Studies.

The pill was tried on lab mice and it was found that a usually sedentary mouse ran an unusually 44 percent longer distance on a treadmill than the other active mice.

“(The drug is) tricking the muscle into ‘believing’ it’s been exercised daily,” Prof Ronald Evans of the Salk Institute in California, who carried out the study.

While this pill is not only a significant invention for couch potatoes, the people who can get a lot of help from this are the athletes as the pill makes muscles “non-fatiguing”.

“Anything that could provide half of a quarter of 1% is attractive,” Dr. Don Catlin, a professor emeritus of molecular and medical pharmacology at UCLA and a top anti-doping expert told Los Angeles Times. “The athlete who can find a way to get an edge is one up on his competitors.”

In 2004, Evans had conducted an experiment in which he genetically engineered mice which turned into marathon runners that did not get exhausted easily. They achieved super-endurance and were also resistant to weight gain even when given high-fat diet. Plus, their insulin levels also improved thereby lowering the levels of circulating glucose.
Evans had activated a PPAR delta, regarded as the genetic switch that turned them into super-runners.

“We wanted to know whether a drug specific for PPAR delta would have the same beneficial effects,” says Evans. “Genetic engineering in humans, commonly known as gene doping when mentioned in connection with athletic performance, is certainly feasible but very impractical.”

The drug was being tested for a various other reasons in humans from quite a long time. “It was found to be a quite safe drug, at least at the doses we were using,” said chemist Paul Laikind, who was testing it since1980s as a means of preserving blood flow to the heart during surgery.

Now with the awesome results the drug is showing, it has been predicted that the pill is going to be an instant hit. It will also not leave any excuses for not being able to work-out for the couch potatoes.