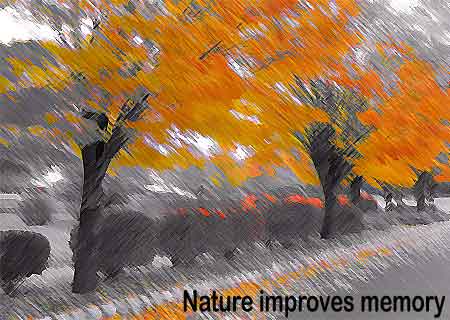 A psychology research of the University of Michigan states that strolling in the park, or just merely going through nature pictures, apparently, enhances memory and attention. These researchers were attempting to unveil the cognitive benefits of interacting with nature.

It’s stated that going outside for a stroll, even when the weather is cold is, evidently, beneficial for enhancing one’s memory span.

This study was conducted by Marc Berman, John Jonides and Stephan Kaplan; psychology researchers at the University of Michigan. It’s said that, supposedly, an hour’s interaction with nature may enhance one’s focus and memory effectiveness by as much as 20 percent.

Berman compares the positive effects of meditation with nature interaction. He says the benefits of nature interaction are alike to meditation. He goes on to say that people, supposedly, in order to gain the same amount of benefit from the stroll don’t even have to enjoy it. “We found the same benefits when it was 80 degrees and sunny over the summer as when the temperatures dropped to 25 degrees in January. The only difference was that participants enjoyed the walks more in the spring and summer than in the dead of winter,” says Berman.

The researchers state that people have more life satisfaction when, apparently, their environment provides them with three basic needs: namely, the ability to understand and explore, to feel competent and effective, and to feel that they make a difference.

In order to test this theory, study participants were asked to take a stroll either on an urban route down main streets, or on a route enjoying nature. The first group of participants are said to have shown no significant improvement in memory, however the second group is said to have, apparently, enhanced their memory span by about 20 percent.

Their findings are published in the Psychological Science issue.