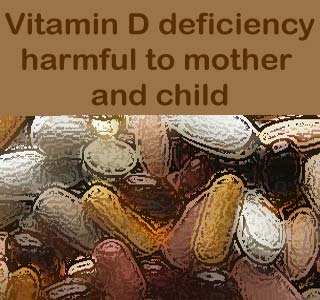 It’s a known fact that vitamin D is very essential for bone health. However, it’s said that vitamin D is believed to be an essential ingredient in maintaining one’s immune system throughout life, as well. Vitamin D deficiency, evidently, is said to be the cause of many newly identified disease risks.

It’s stated that, the occurrence of vitamin D deficiency is, evidently, very common among people. However, apparently, people having darker skin, are said to be more vulnerable to this deficiency. Nutritional disorders among nursing infants, whose mothers suffer from low levels of vitamin D, evidently, are believed to be very common. In spite of being a preventable disorder, this is said to be found very commonly among people.

This issue has grasped the attention of Carol Wagner, M.D., Sarah Taylor, M.D., and Bruce Hollis, Ph.D., from the Department of Pediatrics, in the Medical University of South Carolina (Charleston). They stress upon the urgent need for the commencement of clinical studies to evaluate a way to turn around this deficiency. They hope that certain studies may, probably, be able to estimate the dose of vitamin D needed in breast feeding mothers and their infants, to nourish them with sufficient vitamin D, without any toxicity.

The authors of the paper “Does Vitamin D Make the World Go ‘Round’?” say that presently, evidently, vitamin D is considered to be a complex hormone that aids in the effective functioning of the immune system. Also that, long term vitamin D deficiency is associated with a number of immune disorders like multiple sclerosis, cancer, rheumatoid arthritis and type 1 diabetes among others.

Ruth A. Lawrence, M.D., Editor-in-Chief, Breastfeeding Medicine, says that vitamin D is not a vitamin, apparently, it’s a hormone, and also that it’s not something that just limited for children. Supposedly, adults, are astonishingly, more found to be affected with vitamin D deficiency, than children. Lawrence further says that, vitamin D deficiency is considered a very crucial hormone for maintaining the human immune system.