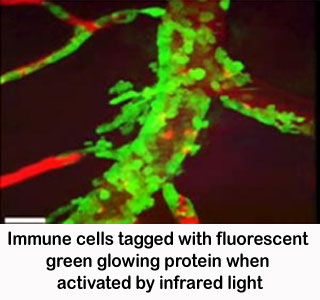 Scientists have apparently discovered an unforeseen cause for the fatal seizures witnessed in mice suffering from viral meningitis.

This study was authored by the scientists of the NYU Langone Medical Center along with collaborators at the Scripps Research Institute in La Jolla, California. Viral meningitis is apparently an infection of the central nervous system.

Michael L. Dustin, Ph.D., and Jiyun V. Kim, Ph.D., NYU researchers made use of intra-vital two-photon microscopy, in order to examine the skull of infected mice.

The scientists, apparently, used the lymphocytic choriomeningitis virus (LCMV) which is relatively harmless in healthy immune system humans. Evidently, LCMV infected mice suffer fatal seizures. It’s stated that the seizures were a result of the response of the immune system to the infection, and not because of the virus.

The researchers state that they were evidently astounded by the T cells behavior. Dr. Dustin says, “Up to a point, the T-cells did everything they should do. They made copies of themselves and migrated to where the virus was, but when they got there, they couldn’t do the right thing. At least they didn’t do what we expected them to, which was to stick tightly to the infected cells.”

He further says that, “A series of frozen images gave the misleading impression that the T-cells were engaging with the infected cells, but intravital microscopy clearly showed that the immune cells appeared to overrun the infected cells.”

This observation evidently suggested that the T cells were not the culprit. Thus more experiments were conducted, which revealed that the two types of white blood cells, the monocytes and neutrophils, instead of the virus, usually fight against the bacteria.

This innovative technology apparently now permits scientists to take moving images of the immune cells in action. The immune cells are tagged with a protein which evidently glows fluorescent green when activated by infrared light. This is supposedly capable of infiltrating living tissues without damaging them.

This study may evidently prove to be useful in unveiling new approaches to the response of the immune system to viral diseases.

Their findings have appeared online and apparently will soon be published in the Nature journal.