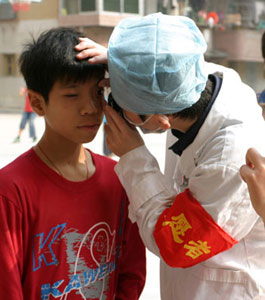 An Australian study has shown that changes occurring in blood vessels in the eye of heavier and obese children from as young as six could be warning signs linked to cardiovascular disease later in life.

Previously widening of veins and narrowing of arteries were only observed in the retinas of heavy teenagers and adults. Now, this is the first time that such troubling signs have seen in children so young.

The researchers did extensive monitoring of these subtle blood vessel changes as they could be an early indication of risks such as hypertension and stroke when children enter adulthood.

According to Paul Mitchell, a professor at the University of Sydney’s Centre for Vision Research said, “It was initially thought that the risk profile developed in adolescents and young adults, but (this study) suggests that these changes probably occur even at an early age.”

“It may be worthwhile examining children or adolescents for subtle retinal vessel size as these could be markers of a person’s risks as they get older into adulthood,” he maintained.

The study involved 1,740 six-year-olds from 34 schools in Sydney.

After accounting for differences such as sex, ethnicity, length of the eyeball, birth weight and mean blood pressure, the researchers found unique changes in minute blood vessels in the retinas of children who were over the mean weight.

Veins carry low-oxygen blood back to the heart, while arteries carry oxygenated blood from the heart.

“The reason for widening of the veins may simply relate to a larger blood volume associated with a heavier child. It’s harder to explain the effects on the retinal (arteries). It could be a reflex response in obese children, but that remains to be seen,” Mitchell added.

It also remained to be seen if the changes to blood vessels were reversible.

“In adult populations, we haven’t (seen) reversibility so often. For the narrowing of arteries associated with elevated blood pressure, even when blood pressure is back to normal, the arteries don’t seem to respond, but we don’t know about the (retinal blood vessels),” Mitchell said.