A latest research states that implantable cardioverter defibrillators (ICDs) can increase the chances of survival of cardiovascular disorder patients. 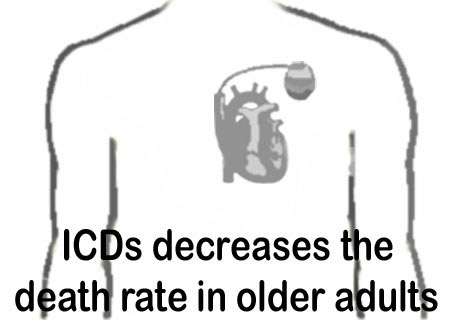 In order to prevent fatal arrhythmias, heart patient’s suffering from left ventricular systolic dysfunction or impaired heart muscle can mostly benefit from these ICDs. It is said that this device is implanted under the patient’s skin, where with the help of electrodes it is connected to the heart muscles.

Lead author, Paul Chan, MD, M.Sc., assistant professor at Mid-America Heart Institute and the University of Missouri, Kansas, says that implanted ICDs increase the survival rate of patient’s aging anywhere from below 65 to above 75 years of age. Apparently with the use of ICDs, their death rate is said to decrease by about 30 percent. It’s even said that an ICD, on detecting fatal rhythms, pumps the heart back into normal rhythm. Unlike previous studies based on younger and healthier patients, this study mainly focuses on older heart patients.

This study was conducted on more than 900 consecutive patients suffering with left ventricular systolic dysfunction. The researchers weighed the results of around 500 ICDs receiving patients, against the remaining number of non-ICDs receiving patients. The average age of the studied patients was said to be about 67 years.

The results revealed that almost 22 percent deaths took place in the ICD group, while almost 27 percent of deaths took place in the non-ICD group. Of this Chan says, “The ICD reduced all-cause mortality by 30 percent compared with patients who didn’t receive ICDs. The use of ICDs in general practice reduced mortality similar to the levels seen in clinical trials. And, the use of ICDs in older patients and patients with comorbidities reduced mortality both in relative and absolute terms.”

The study of 75+ patients revealed that under normal circumstances their chances of survival remained the same. However, the addition of age along with other co-morbidities apparently reduced their survival rate.

Due to less availability of 75+ patients, this study was believed to be limited. More research will be needed in order to provide a deeper in depth analysis of ICD use benefits in older adults belonging to this sub group.

Their findings are presented in the Circulation: Cardiovascular Quality and Outcomes.