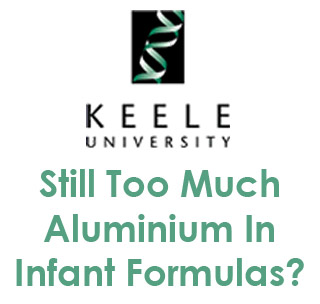 Infant formulas are known to be an essential part of nutritional requirements for preterm and term infants. The reported presence of aluminium in them suggests manufacturers may still not be considering it as a health issue. In a recent study conducted by a team at Keele University in Staffordshire, scientists suggest the vulnerability of infants to early exposure of aluminium hints at the urgent requirement of lowering it in infant formulas.

Apparently aluminium is non-essential and associated to human disease. However its high occurrence in a host of popular brands of infant formulas seems to be a cause for concern. It is said to be specifically high for a product fashioned for preterm infants and a soya-based product for infants having cow’s milk intolerances and allergies. Seemingly, an evidence of both immediate and late toxicity in infants has been observed among infants exposed to aluminium. The sources of contamination of infant foods with aluminium appear to be myriad.

Led by Dr Chris Exley with Shelle-Ann M Burrell, the investigators included 15 different branded infant formula products. These were powdered and ready-made liquid formulas that were claimed to be based on cow’s milk and a soya-based product. Preterm babies, stage one (0-6 months) and stage two (6 months plus) infants were the categories of formulas involved. Stored as per manufacturer’s instructions, the products were then sampled straight from their packaging keeping extraneous contamination at bay. Between each sampling, the ready-made variety was shaken thoroughly.

It was discovered that the aluminium content of formulas designed from powdered milk was much higher in comparison to ready-made milks in general. In the milk formulas, the concentrations of aluminium was seen to vary from 200 – 700 g/L and the scientists indicate that it may result in the intake of up 600 g of aluminium everyday. As compared to breast milk, the concentrations of aluminium in infant formulas are known to be up to 40 times higher. Apparently too high for human consumption, it seems to be even harmful for the more vulnerable group as pre-term and term infants.

While present levels of aluminium are claimed to have not caused adverse effects in healthy infants, there apparently aren’t any clinical investigations that contest the probability. Even earlier analysis has indicated the possible toxicity of aluminium in infants to have confounding disorders. There are said to be no concrete links between aluminium exposure via infant formulas and toxicity in healthy infants though. Nevertheless, it does not nor should it rule out the possibility according to the scientists.

The finding has been published in the journal, BMC Pediatrics.