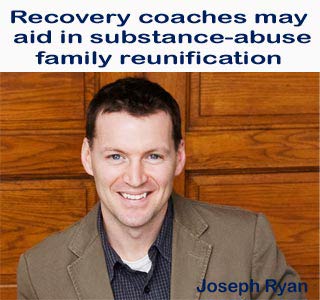 The National Center on Substance Abuse and Child Welfare reports that around 11 percent of the babies born in the U.S. are exposed to illicit drugs or alcohol in the womb. It is also stated that if child protection removes these children from their homes, then the chances of a prolonged stay in child foster may be there. The chances of reunion with their parents may be very low.
However, a recent study saves the day by stating that recovery coaches can possibly reduce the number of substance-exposed births and also aid in reuniting substance involved families, thus in turn also saving millions of dollars of the child-welfare systems. This study was conducted by Joseph P. Ryan, a faculty member in the School of Social Work, University of Illinois. The study was part of a larger collaboration among the University of Illinois, with the Department of Children and Family Services, and Treatment Alternatives for Safe Communities (DCFS).

They studied around more than 900 chronic drug and alcohol abusing women, who had lost their child’s custody to DCFS. These families were randomly placed in one or two treatment conditions over a period of five years. The mother’s who were placed in the control group, were provided with traditional child-welfare and substance-abuse services.

In the second group, mothers were placed in the experimental group in addition to traditional services they were given recovery coach services as well. The recovery coaches aimed to urge the mothers to get substance abuse treatment, and also convince them to continue with it. Even if a mother faced a relapse, the recovery coach would attempt to get her again enrolled for the treatment. They also aided the mothers to meet the legal requirements for gaining the custody of their child.

About the low rate of family unification in child-welfare systems, Ryan says, “One reason that they don’t achieve reunification is that they are unable to address the core problem of substance abuse, and that really presents an obstacle toward judges making decisions to have the children return home. A recovery coach increases the reunification rate by about 6 percent, which is a small but significant gain.”

It stated that a hurdle to recognition of substance exposure at birth may be the lack of federal of state laws, claiming to test newborn infants for potential drug exposure.

Ryan was also accompanied by professor Christopher R. Larrison, research specialist Pedro Hernandez and graduate student Jun Sung Hong at the U. of I., and Sam Choi, a postdoctoral scholar in the School of Social Service of Administration at the University of Chicago.

This study was published in the Child Abuse and Neglect journal.