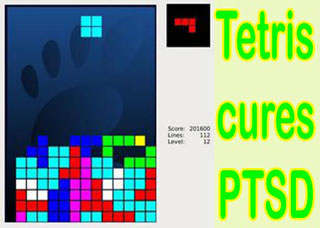 We all love to play video games in our spare time. After a day filled with stress and difficult decision-making, who wouldn’t want to unwind with a game of “Tetris”? Now even a latest Oxford University research recommends this game. They say that playing this game, after the occurrence of a disturbing event, may actually help in reducing the flashbacks suffered in post-traumatic stress disorder (PTSD).

It’s stated that present treatments exist for after the occurrence of PTSD. If however, this technique of game-playing yields positive results, then it could be utilized in order to reduce the trauma and stress linked with PTSD.

The researchers state that this particular game may be able to wipe out the negative memories of the disturbing event that was experienced. It may also be able to reduce the severity of the flashbacks experienced at a later stage.

Lead author, Dr. Emily Holmes of the Department of Psychiatry at Oxford University, says that, “This is only a first step in showing that this might be a viable approach to preventing PTSD. This was a pure science experiment about how the mind works from which we can try to understand the bigger picture. There is a lot to be done to translate this experimental science result into a potential treatment.”

The Oxford researchers state that this theory relies on three factors:

Dr Catherine Deeprose, Department of Psychiatry at Oxford University, says that, “We know there is a period of up to six hours in which it is possible to affect certain types of memories that are laid down in the human mind.”

The researchers monitored around 40 healthy volunteers. They were shown a film that included various traumatic images. After a period of 30 minutes, some of the volunteers were asked to play a game of “Tetris”, while the rest didn’t. Apparently, at a later stage, the volunteers who had played the game experienced lesser dramatic flash-backs of the traumatic experience.

Dr. Holmes says that, “Tetris” may supposedly create hurdles in the way sensory memories are stored in the brain after a traumatic experience. This supposedly may be the reason why lesser amounts of flashbacks are experienced at a later stage.

These researchers hope to soon be able to use this theory as a means to reduce flashbacks experienced after PTSD. However, it’s also stated that these are only preliminary results. More research and deeper studies need to be conducted before this approach can be used as a treatment.

Their report is published in PLoS ONE.

In the meanwhile, irrespective of its results, there is no harm in indulging oneself in a video game, is it?

Gene discovery hints that cancer medication may even treat alcoholism