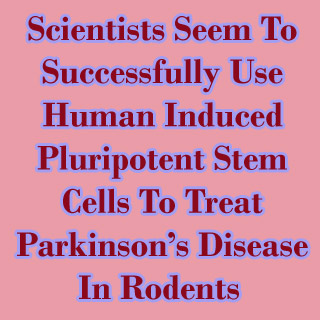 Parkinson’s disease (PD) is known as a progressive, incurable neurodegenerative disorder which has affected 1.5 million Americans. It is believed to cause tremor, slowness of movement and rigidity. Experts from the Buck Institute for Age Research seem to have employed human induced pluripotent stem cells (iPSCs) to successfully treat rodents with PD.

Researchers presume a previously developed scalable protocol to help produce the type of neurons essential for treating the disease. This protocol is also assumed to shed light on the way iPSC’s can be put to use in several biomedical applications. In the course of the research, investigators gathered human iPSCs from skin and blood cells and coaxed them to become dopamine-producing neurons. Dopamine a neurotransmitter produced in the mid-brain may help in the progress of many important functions, like motor skills. It was affirmed that patients with PD often report dopamine deficiency.

“These cells are reprogrammed from existing cells and represent a promising unlimited source for generating patient-specific cells for biomedical research and personalized medicine. Human iPSCs may provide an end-run around immuno-rejection issues surrounding the use of human embryonic stem cells (hESCs) to treat disease. They may also solve bioethical issues surrounding hESCs,” remarked Xianmin Zeng, Ph.D., who is lead author of the study.

These iPSC-derived neurons were transplanted into rats with mid-brain injury very much alike to that found in human PD. As a result the cells seemingly became functional and the rats showed better development in their motor skills. Claimed to be a novel research, investigators have demonstrated iPSC-derived cells to engraft and improve behavioral deficits in animals with PD. It is believed that dopamine-producing neurons achieved from hESCs help to survive and correct behavioral deficits in PD. Researchers suggest that overall iPSCs is strongly similar to hESCs.

Alan Trounson, Ph.D., the President of the California Institute for Regenerative Medicine “The studies are very encouraging for potential cell therapies for Parkinson’s disease. The researchers showed they could produce quantities of dopaminergic neurons necessary to improve the behavior of a rodent model of PD. We look forward to further work that could bring closer a new treatment for such a debilitating disease.”

It was mentioned that the protocol employed to differentiate the iPSCs was identical to one developed by Zeng and colleagues for hESCs. The research may facilitate the adoption of protocols to good manufacturing practice standards. It was ascertained that protocols are a pre-requisite for experimenting iPSCs in humans.

The research was published in the on-line edition of the journal Stem Cells.

Is the U.S. susceptible to MDR-TB epidemic?