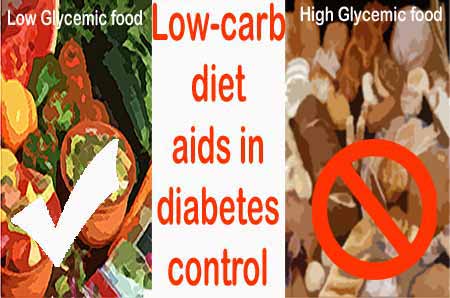 A latest Duke University research states that the intake of carbohydrates, with the lowest glycemic index rating, enhances the blood sugar control level. This revelation was done in a six-month comparison of low-carbohydrate diets.

The Duke University Medical Center researchers examined around 84 obese or type 2 diabetic volunteers. They were randomly placed in the low-carbohydrate ketogenic diet or the low-glycemic reduced calorie diet.

Lead author Eric Westman, MD, director of Duke’s Lifestyle Medicine Program, says that in the patients who consumed the low-glycemic diet, a reduction or complete riddance from type 2 diabetic medications was noticed.

Both the groups of volunteers were said to have consumed nutritional supplements, attended group meetings, and followed an exercise routine as well.

Westman says that, “Low glycemic diets are good, but our work shows a no-glycemic diet is even better at improving blood sugar control. We found you can get a three-fold improvement in type 2 diabetes as evidenced by a standard test of the amount of sugar in the blood. That’s an important distinction because as a physician who is faced with the choice of drugs or diet, I want a strong diet that’s shown to improve type 2 diabetes and minimize medication use.”

The volunteers were assessed for about 6 months. After its completion, their glycemic control was verified by conducting blood tests, which calculated the A1C hemoglobin. This is said to be the standard test that measures the blood sugar control in diabetic patients.

Westman says it is very clear that the reduction of carbohydrates brings about a reduction in blood sugar level and in body weight as well. He further says that this diet may not be an easy task for everybody. This is apparently a therapeutic diet for ill people.

He further says that in their program, people visit them often for reminders and reinforcements. This approach at Duke has apparently being used on innumerable patients till date. And their research and clinical data proves that this approach is truly beneficial.

This research was funded by the Robert C. Atkins Foundation. It is published online in Nutrition and Metabolism.