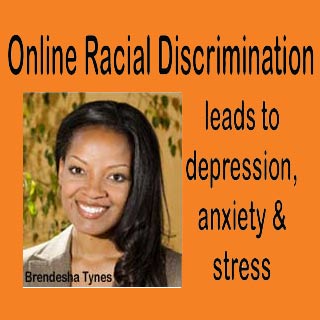 The introduction of internet has changed the life of almost everyone in one way or the other. However, it’s a double-edged sword. Along with positive effects, it also has certain negative effects. Internet is believed to have bridged the gap between people belonging to different races. However, a latest study states that racism is still prevalent among youngsters, which in turn gives rise to depression, stress and anxiety.

Online victimization apparently occurred through online games, instant messaging, discussion forums, and in social networking sites among others. The findings revealed that irrespective of a person’s race, racial discrimination usually resulted in depression, anxiety and stress. In female victims, an increase in these symptoms was noticed, as compared to male victims.

However it’s also pointed out that there is a considerable discrimination gap between blacks and whites. Thus, a more detailed analysis is needed in order to verify the effects caused due to these differences.

Tynes further highlights another point that is a great area of concern. She apparently uncovered certain online hate groups who were always on the lookout for adding potential new members to their group, by creating child-friendly websites. She says, “There are white power groups who, for example, lure teens and kids by creating Web sites that are advertised as being for kids. That site differs from the main site in that it’s only tinged with negative language, not out-and-out racist language. It’s masked racism that uses a bait-and-switch to entice unsuspecting kids.”

In spite of the many negative effects that internet can have on an adolescent, Tynes recommends internet usage to adolescents.

She recommends providing racial knowledge to one’s child, in an attempt to familiarize them with the probability that such things may take place. So that if at all they experience racism first hand, they should be able to tactfully handle the situation and not get carried away with false racial claims.

Their article, ‘Online Racial Discrimination and Psychological Adjustment Among Adolescents,’ is published in the Journal of Adolescent Health.