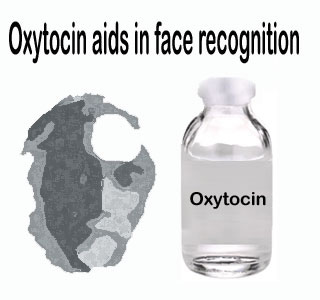 A latest study states that the oxytocin hormone linked to breast feeding and child-birth aids humans in familiar face identification.

A dose of the oxytocin hormone supposedly improved the study’s subjects face identification. However with the hormone dose, no improvement for inanimate objects was noticed.

Ernst Fehr, PhD, an economist at University of Zurich, says that, “This is the first paper showing that a single dose of oxytocin specifically improves recognition memory for social, but not for nonsocial, stimuli. The results suggest an immediate, selective effect of the hormone: strengthening neuronal systems of social memory.”

Co-author Peter Klaver, PhD, University of Zurich, says that, “Recognizing a familiar face is a crucial feature of successful social interaction in humans. In this study, we investigated for the first time the systematic effect of oxytocin on social memory in humans.”

The study participants either received oxytocin nasal spray or a placebo from the study authors. They were later shown images containing faces and inanimate objects, like sculptures, houses, etc. This was followed by a surprise test the following day. The participants were then shown the previous day’s images in addition to some new images as well. They were asked to point out the images that they felt were “new,” images they specifically “remembered” seeing, and images they were familiar with but didn’t remember their presentation context.

The authors state that this study may aid in treating disorders in which the social memory gets affected, like in autism.

This research was supported by the Swiss National Science Foundation, the Swiss Federal Institute of Sports, and the University of Zurich.

Study findings are published in The Journal of Neuroscience issue.