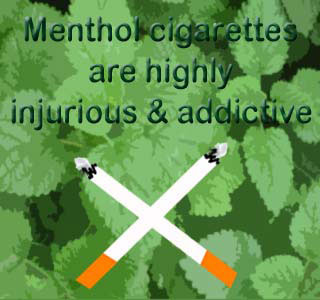 It’s a known fact that smoking is highly injurious to one’s health. The act of quitting smoking may require a lot of self control and will power. For the sake of themselves and their loved ones, some determined and strong willed smokers gain success in quitting smoking entirely. However, according to a latest study, the quitting of menthol cigarettes may be much harder than the other forms of cigarettes.

This study was conducted by The University of Medicine and Dentistry of New Jersey (UMDNJ) researchers. They state that quitting of menthol cigarettes is comparatively harder than the other cigarettes, mostly in the Latino and African-American smokers.

According to the study researchers, it’s the cooling sensation of menthol that makes the task of nicotine inhalation easier. Thus apparently, they gain a stronger and highly addictive exposure to nicotine from each cigarette.

The director of the Tobacco Dependence Program, Jonathan Foulds says that, “These results build on growing evidence suggesting that menthol is not a neutral flavoring in cigarettes. It masks the harshness of the nicotine and toxins, affects the way the cigarette is smoked and makes it more deadly and addictive. More than 80 percent of the African American smokers attending our clinic smoke menthols, and they have half the quit rate of African Americans who smoke non-menthol cigarettes.” Thus apparently, lung cancer diseases are most commonly found in African American smokers.

Another area of concern for the researchers is that most youngsters, mainly Latinos and African Americans, are getting attracted and addicted to menthol cigarettes. It’s also said that youths may fulfill the criteria set in mind by the tobacco industry, while marketing the deadly menthol cigarettes. Such industries may aim towards the lower group of people with a lesser amount of money to splurge on, like the youths, in an attempt to get them addicted to these highly fatal types of cigarettes.

Apparently, at present the state authorities have prohibited fruit flavored and candy flavored cigarettes, however the addition of menthol has not be banned. The researchers hope that in future, maybe their study may prove to attract the right attention and cause a ban on menthol additions in cigarettes, as well.

Their study, “Lower quit rates among African American and Latino menthol cigarette smokers at a tobacco clinic,” are published online, and are soon going to be published in print in The International Journal of Clinical Practice.