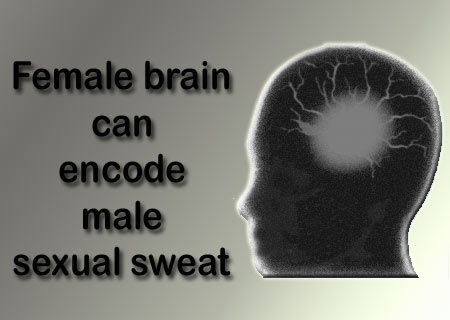 A latest study states that the human sweat holds the answer to socio-emotional meanings, including sexual feelings. This mind-boggling study was conducted by the Rice University.

It’s a known fact that animals, through scent communicate with each other. The study investigators evaluated the manner, in which the female brain processed and encoded the smell of sexual sweat from men. This study was conducted by Denise Chen, assistant professor of psychology at Rice.

This experiment was conducted in an attempt to gain additional insight in the process of how human beings sense of smell influences their higher powerful sense of sight and hearing.

This experiment was conducted on about nineteen healthy female participants. They were each asked to inhale olfactory stimuli accumulated from four sources, one out of which was sweat accumulated from sexually aroused men. The investigators, through functional magnetic resonance imaging (fMRI), examined the natural human sexual sweat.

The investigators revealed that various sections of the human brain are a part of this type of chemosensory communication. The right fusiform region, the right orbitofrontal cortex and the right hypothalamus are involved in this encoding process.

Chen says that, “With the exception of the hypothalamus, neither the orbitofrontal cortex nor the fusiform region is considered to be associated with sexual motivation and behavior. Our results imply that the chemosensory information from natural human sexual sweat is encoded more holistically in the brain rather than specifically for its sexual quality.”

Their results imply that the brain has the capability to detect chemosensory communication. The human sexual sweat is inclusive of this type of communication.

This is said to be the first study of its kind to have evaluated the human social chemo-signals with the help of fMRI.

A more in depth and detailed analysis needs to be conducted in order to extend our primary knowledge about the human smell at neural level.

Along with Chen, the study was co-authored by Wen Zhou, a graduate student in the Psychology Department.

This study was partly supported by the National Institutes of Health. Their findings are published in the Journal of Neuroscience.

New technique alleges feared side effect of Alzheimer drug could be...