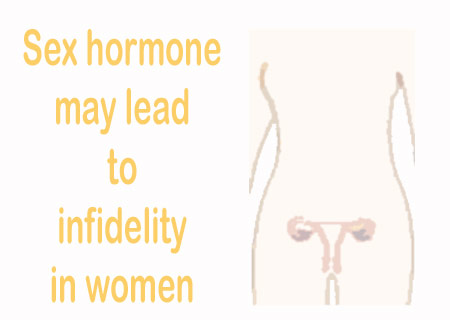 A latest study says that high level sex hormone women may cheat their present partner and indulge in sexual intercourse with a new partner. The oestradiol sex hormone level in them may be the culprit for such behavior.

This study was conducted by the psychology researchers at The University of Texas, Austin. Kristina Durante, doctoral candidate, along with Norm Li, assistant professor of psychology, examined the link between the ovarian hormone and sexual motivation and fertility in women.

They studied around 52 female undergraduates, who didn’t make the use of contraceptives. Their age varied from 17 to 30 years of age.

The subjects’ hormone level was gauged twice during the woman’s ovulatory cycle. These women were asked to rate themselves on their physical attractiveness. Individual observers as well were asked to rate the physical attractiveness of these women. The subjects’ were also asked various questions in an attempt to evaluate their potential infidelity tendency.

The results revealed that the women with higher levels of oestradiol hormone believed themselves to be physically attractive, and they were more likely to indulge in an adulterous behavior. They were more inclined to flirt, kiss or have a serious affair with a new partner.

The researchers say that a higher level of this hormone in women makes them vulnerable to not feel satisfied with a long-term partner. Thus these women feel the need to look for another partner. Having said this, the researchers also say that, these women may not just opt for casual sex or one-night stand. They might however consider a means of serial monogamy.

Their article, “Oestradiol Level and Opportunistic Mating in Women,” is published in the Proceedings of the Royal Society of London: Biology Letters.