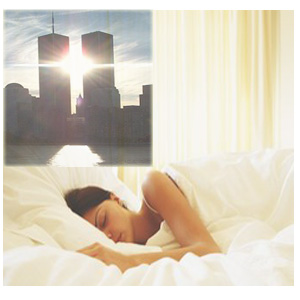 The nightmare of 9/11 continues to haunt us. Perhaps in more ways than we know. A recent study published in the journal, Sleep indicates that the terrorist attacks of September 11, 2001 have resulted in people experiencing more intense dreams.

Sleep researchers at Tufts University and Newton –Wellesley Hospital in Boston observed 44 people, 111 men and 33 women residing in the United States between the ages of 22 to 70 and recorded their dreams over a period of 2 years.

Each of these individuals accounted 20 consecutive dreams from their records, with the last 10 dreams occurring pre-9/11 and the first ten posts the tragedy. The study showed that the intensity of the images in their dreams increased after the attacks.

However none of the dreams included images of airplanes or tall buildings or anything of that sort even though the individuals were constantly bombarded with these images via the television.

Also the study showed that the dreams weren’t longer but were increasingly dream-like and bizarre.

Ernest Hartmann, MD at Tufts University and author of the study said that this increase in intensity is very consistent with the findings noticed in people who have experienced trauma of various kinds

It is certain that everyone around the world suffered the day the Twin Towers fell. Perhaps some more than others.