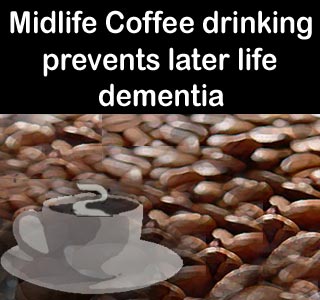 This astounding study was conducted at the University of Kuopio, Finland; and was also supported by the National Public Health Institute, Helsinki, Finland. For this study more than 1400 subjects, aged 65 to 79 years, were chosen from the survivors of population-based cohorts surveyed earlier in the North Karelia Project and the FINMONICA study. This was followed by an average follow up of 21 years. Apparently around 61 of them were found to have developed dementia, while around 48 of them developed AD.

“We aimed to study the association between coffee and tea consumption at midlife and dementia/AD risk in late-life, because the long-term impact of caffeine on the central nervous system was still unknown, and as the pathologic processes leading to Alzheimer’s disease may start decades before the clinical manifestation of the disease,” says Lead researcher, associate professor Miia Kivipelto, University of Kuopio, Finland and Karolinska Institutet, Stockholm, Sweden.

Kivipelto states that their study findings need to be evaluated by other studies as well. However, it does gain attention to the fact that a person’s diet may be able to trigger dementia or AD in later life.

The study concluded by saying that the knowledge of the positive effects of coffee on dementia or AD prevention can be utilized in order to develop new treatments and therapies to treat this disease.

This study is published in the Journal of Alzheimer’s Disease issue.