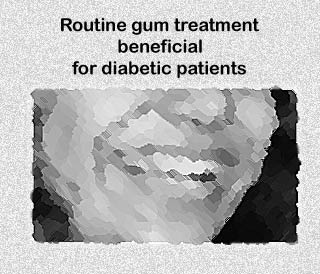 The researchers were provided data by the Blue Care Network. This data was accumulated from around more than 2,000 patients, who were enrolled in BCN at a particular period of time, and evidently also had 12 consecutive months of medical, dental and pharmaceutical coverage.

George Taylor, University of Michigan associate professor of dentistry, says that, this study was not conducted to accurately determine cause and effect. Lead author of the study, Taylor, apparently wanted to examine and verify the connection, if any, between routine, non-surgical treatment for gum disease and lower medical care costs for diabetics.

It’s stated that in periodontal disease, the body reacts to the bacteria producing proteins or chemicals called inflammatory mediators. Open sores and ulcers present in the gums serve as a route for bacteria to enter the body’s blood circulation. It’s believed that apparently the bacteria and these inflammatory mediators prohibit the effective removal of sugar or glucose from the blood, by the body. Poor diabetes control is apparently when the blood sugar level is high. Poor diabetes control could evidently cause cardiovascular, kidney and vision disorders, among other diseases.

“Cleanings and other non-surgical periodontal treatment remove the harmful bacteria. We believe this helps prevent the body from producing those harmful chemicals that can enter the systemic circulation and contribute to poorer diabetes control,” says Taylor.

Taylor further says that, they supposedly found cases of adults who were given routine periodontal treatments, and their medical care costs were said to be lower than the one’s who did not. It’s believed that these findings could prove to be beneficial for people in general.

This research is said to be supported by a grant from the Blue Cross Blue Shield of Michigan Foundation.