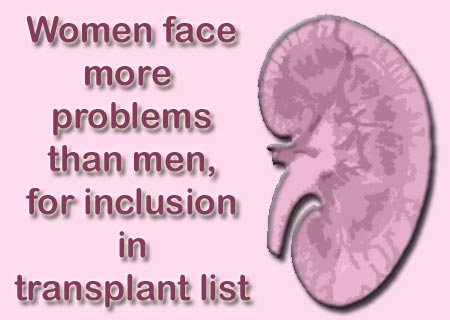 This study was conducted by Johns Hopkins University School of Medicine. The study investigators analyzed the data of around more than 56,000 patients suffering from first-onset end-stage renal disease. This data was accumulated from the United States Renal Data System (USRDS) kidney transplant list.

Lead researchers, Dorry Segev, MD, Johns Hopkins transplant surgeon, says that, “As woman age, that discrepancy widens to the point where woman over 75 are less than half as likely as men to be placed on a kidney transplant list. If the women have multiple illnesses, the discrepancy is even worse.”

It is stated that USRDS keeps a check on the patient’s receiving dialysis. They gauge the patient’s chance of being included in the list after taking a look at the additional elements that can influence a patient’s relative chances of survival after transplantation as compared to dialysis.

The results revealed that women below 45 years stood an equal chance of making it to the list as compared to men. However, the rate of 45+ women being included in the list dropped relatively as compared to the same aged men. Evidently the rate dropped even further with other co-morbidities like diabetes or heart diseases.

According to Segev, this “perceived frailty” of woman could be the reason for their lower chances of inclusion in the list. He says there are two ways through which patients are included in the transplant list; through a nephrologist’s reference and the patient’s acting on that reference. He further says on inclusion in the list, irrespective of age, both men and women stand an equal chance of survival.

Segev states that such discrimination may prove to be pointless, because apparently women had the same or even higher survival rates after transplant as compared to men. He also says that discrimination takes place even after being included in the list. For instance African Americans have a low chance of being included in the list. Evidently even after inclusion, they have a low chance of receiving a transplant.

Their findings are available online in the Journal of the America Society of Nephrology.