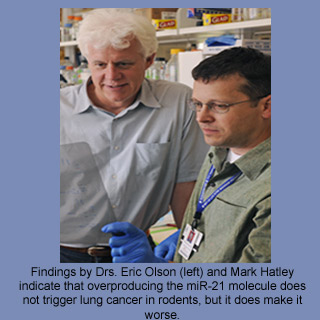 Great quantities of the molecule microRNA-21 or miR-21 in human tumors are assumed to trigger non-small-cell lung cancer (NSCLC). Though it has been associated to NSCLC, the exact role played by this molecule may not be known. Experts from the UT Southwestern Medical Center believe that miR-21 is an appropriate target for treating the disease.

Investigators carried out experiments on mice that had been altered specifically to harbor NSCLC. The scientists genetically engineered some of these mice to develop miR-21 in overabundance. In the other group miR-21 gene was deleted altogether, which eliminated this molecule in those rodents. Animals suffering from cancer displayed great quantities of miR-21, or overexpression. This molecule is believed to enhance the formation, growth and survival of new tumors by turning off certain genes that normally allow cancer cells to die.

“These results indicate that overexpression of miR-21 alone is not enough to initiate tumors in a healthy animal. Instead, it appears that miR-21 enhances the growth and survival of existing lung cancer,” shared Dr. Hatley, a Pediatric Scientist Development Program Fellow, an instructor of pediatric hematology/oncology and the lead investigator.

The group of mice with overexpressed miR-21 reported extreme tumors than their lung-cancer-carrying littermates with normal levels of miR-21 at18 weeks of age. It was noted that in healthy rodents who were engineered to overexpress miR-21, cancer was not developed. Researchers monitored that deleting miR-21 sensitizes the animals’ cancer cells to a certain kind of chemotherapy. Therefore, restricting miR-21 in lung-cancer patients may be a good inclusion in therapy. Further investigations can be initiated for ascertaining if it is applicable to humans too. Scientists can even conduct experiments for forming a drug that possibly inhibits miR-21.

The research was published in the September 14 issue of Cancer Cell.