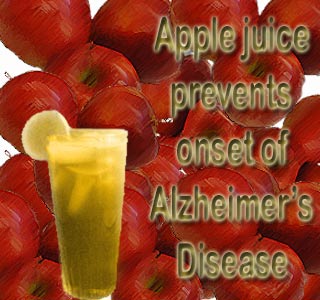 “An apple a day keeps the doctor away,” is a very well-known quotable quote. The reason behind this quote is very apt. An apple is believed to have many positive health effects in an individual. Now a latest study has in fact stated that apple juice can possibly prevent the onset of Alzheimer’s disease (AD).

This study was conducted by Thomas B. Shea, PhD, of the Center for Cellular Neurobiology; Neurodegeneration Research University of Massachusetts, Lowell and his team. A number of laboratory studies were conducted on old mice, in order to test the effect of apple juice on their performance in maze trials.

The results revealed that the mice that had had apple juice performed better than what they would have performed otherwise, in the maze trials. It was noticed that apple juice enhanced the performance of these aged mice.

Dr. Shea states that, “These findings provide further evidence linking nutritional and genetic risk factors for age-related neurodegeneration and suggest that regular consumption of apple juice can not only help to keep one’s mind functioning at its best, but may also be able to delay key aspects of Alzheimer’s disease and augment therapeutic approaches.”

The study investigators have revealed that the mice receiving approximately two glasses of apple juice everyday for a period of 1 month produced a lesser amount of the beta-amyloid protein. This protein is believed to be the culprit behind the formation of “senile plaques,” which are most commonly found in patients suffering from AD.

In order to avoid and prevent the development of various types of diseases, a balanced diet including a lot of fresh fruits and vegetables is recommended.

Their article, “Dietary Supplementation with Apple Juice Decreases Endogenous Amyloid-β Levels in Murine Brain,” is published in the Journal of Alzheimer’s Disease issue.