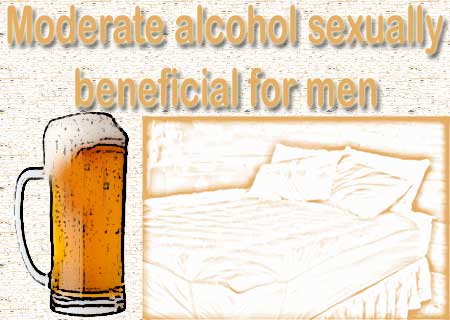 It is commonly known that moderate drinking may enhance an individual’s health. Various studies have highlighted the positive effects of moderate boozing. Now, another study has been conducted which further contributes to the list of positive effects involved with moderate drinking. They state that men who indulge in occasional boozing may perform better in bed, as compared to the one’s who don’t drink at all.

The results revealed that alcohol drinkers were 30 percent less likely to report any trouble in bed than their non-drinking counterparts. The rate of erectile dysfunction was lower in these men as compared to the teetotalers. It was found that smokers, ex-drinkers and cardiovascular patients faced an increased risk of erectile dysfunction.

Lead investigator, Dr. Kew-Kim Chew, of Western Australia’s Keogh Institute for Medical Research, says that, “We found that, compared to those who have never touched alcohol, many people do benefit from some alcohol, including some people who drink outside the guidelines.”

It is stated that weekend drinkers and high-risk drinkers suffered a lower risk of developing erectile dysfunction in comparison to those who consumed alcohol only once in a week. The study investigators say that their findings suggest a link between low-risk drinking and proper erectile functionality.

This study may prompt many men to pop open the champagne cork, and indulge themselves in a glass or two. If nothing comes out of it, they may have at least satisfied their taste buds!

Their findings are to be published in The Journal of Sexual Medicine.