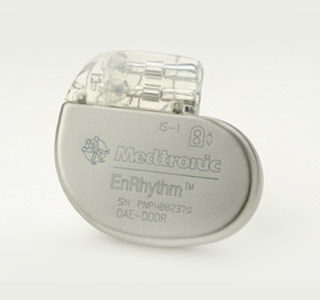 A study on the operation of a latest device has seemingly demonstrated the devices capability to perform efficiently without experiencing any MRI-related complication. The EnRhythm MRI SureScan pacemaker is believed to have revealed that it is not subject to any problems arising due to magnetic resonance imaging (MRI) scans. This announcement was made at Heart Rhythm 2009, which is said to be the annual congress of the Heart Rhythm Society.

It has been stated that in the U.S., for safety measures, the use of implanted pacemakers and defibrillators have not yet been approved for use with MRI. Magnetic resonance imaging is believed to be an imaging technique which is mostly used for diagnosing a disease. The medical guidelines and U.S. FDA have seemingly stated that patients with an implanted device (pacemaker or defibrillator) are usually asked to stay away from MRI screenings. This restriction may have been placed due to the potential risk faced by the implanted devices from MRI scans. Such scans may have the likelihood of interfering with the normal functioning of the device, or damaging it, or may be even delivering avoidable pacing therapy which may prove to be fatal.

Seemingly, the present study is stated to have verified that the EnRhythm MRI SureScan pacing system may be able to assist patients in need of a pacemaker to derive maximum benefits from an MRI screening.

Bruce L. Wilkoff, MD, director of Cardiac Pacing & Tachyarrhythmia Devices, Department of Cardiovascular Medicine and professor of medicine at Cleveland Clinic Lerner College of Medicine of Case Western Reserve University, says that, “Each year, approximately one million people are implanted with a pacemaker, thousands of whom should receive diagnostic MRI scans. This investigational study showed positive results, indicating that many more patients may have access to MRI, a vital and often irreplaceable tool in detecting and managing conditions such as cancer and neurological disorders.”

Apparently, it was discovered that when used as per the product’s labeling, this device may function properly before and after the MRI scan. It didn’t seem to have gotten affected or faced any MRI-related complications.

David Steinhaus, MD, medical director of the Cardiac Rhythm Disease Management business at Medtronic says that, “Despite well-documented risks and warnings of MRI-related complications, pacemaker patients do receive MRI scans off label. Physicians and patients faced with urgent clinical needs have had to make difficult risk/benefit decisions and accept the risks of an MRI scan. Through our development process, we identified real risks and designed a system to address these risks for pacemaker patients. We are encouraged by the clinical results of the EnRhythm MRI SureScan pacing system, as we believe that providing safe access to MRI for pacemaker patients can reduce risk and lead to better health outcomes.”

It is hoped that the present study may have provided encouraging data to gain FDA approval for use with MRI. This device is believed to have been commercially made available in Europe. This system is also thought to be the first and only pacemaker to have been designed and approved for use with magnetic resonance imaging.