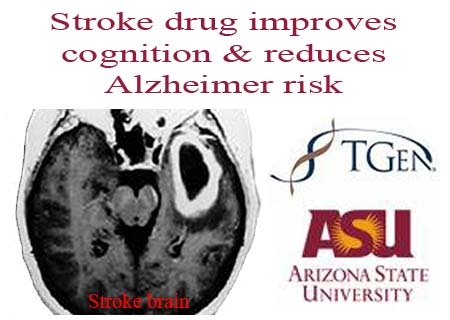 According to an astounding study the drug used for enhancing an individual’s blood flow to the brain, may also prove to be effective for better learning, memory and may even lower the risk of Alzheimer’s disease. This study was conducted by the Translational Genomics Research Institute and the Arizona State University.

For about a decade, the Fasudil drug has been put to use for protecting the brain of stroke patients, by dilating their blood vessels when their blood flow is restrained. The investigators of this particular study have discovered that a part of the Fasudil drug, hydroxyfasudil, may be helpful in enhancing the cognitive abilities in rats. This drug seems to help these middle-age rats when placed in a complex maze.

Study author, Dr. Matthew Huentelman, Translational Genomics Research Institute’s investigator says that, “If Fasudil proves to be safe and effective in enhancing learning and memory, it could represent a viable new option for the prophylactic treatment of disorders with a cognitive decline component. This could include diseases like Alzheimer’s as well as general age-related impairment. In short, it may be a new pharmaceutical weapon that could be used even before the occurrence of symptoms.”

The authors believe that the Fasudil drug may have great potential for enhancing age related cognitive abilities in human beings. Lead author, Dr. Heather Bimonte-Nelson, assistant professor, Arizona State University, says that, “The effects in our aging-animal model were robust, showing enhancements in both learning and two measures of memory. The possibility that these findings may translate to benefits to human brain health and function is very exciting.”

This study was conducted on middle-age rats. During the course of the study, the investigators discovered that the learning and memory boosts in these rats relied on the amount of the hydroxyfasudil dosage used.

The study findings hint at the possibility that this particular drug may yield similar results in humans as well. This drug may have a positive effect on the hippocampus, which is a part of the brain that usually gets affected in those people suffering from age-related disorders.

The findings are published in the Behavioral Neuroscience journal.

Gene expression and splicing differ for every tissue