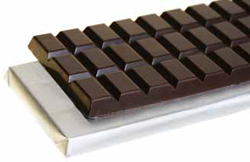 Who on earth can refrain from the sinning bite of a dark chocolate, especially when you discover that this bite of chocolate is sure to benefit your health in the long run.

oops a few bits of dark chocolate a day can do the same good as what aspirin does in reducing blood clots and preventing heart attacks, researchers said on Tuesday in a study of chocolate lovers.

Lead researcher Diane Becker told the annual conference of the American Heart Association, in Chicago said, “What these chocolate ‘offenders’ taught us is that the chemical in cocoa beans has a biochemical effect similar to aspirin in reducing platelet clumping which can be fatal if a clot forms and blocks a blood vessel, causing a heart attack.”

However don’t run to open the fridge and gobble them all because the Johns Hopkins University School of Medicine professor has warned that her work is not intended as a prescription to eat huge amounts of chocolate candy laced with health offending substances like sugar, butter and cream.

However, she said that two tablespoons a day of dark chocolate, meaning the purest form of the candy made from dried extract of roasted cocoa beans may be just what the doctor ordered.

For almost 20 years, scientists have known that dark chocolate, rich in chemicals called flavonoids, lowers blood pressure and has other beneficial effects on blood flow.

Becker’s findings show that normal, everyday doses of chocolate found in ordinary foods is enough to give clot-controlling benefit, rather than the kilos (several pounds) of chocolate earlier studies said were needed for flavonoids to have a significant effect.

“Eating a little bit of chocolate or having a drink of hot cocoa as part of a regular diet is probably good for personal health, so long as people don’t eat too much of it, and too much of the kind with lots of butter and sugar,” claimed Becker.

The study is based on tests conducted on 139 chocolate lovers who flunked out of a Johns Hopkins University study on aspirin and heart disease helped researchers stumble on an explanation of why a little chocolate a day can cut the risk of heart attack.

Their “offense,” researchers said, led to what is believed to be the first biochemical explanation of why people who eat a few pieces of chocolate a day lower their risk of dying of a heart attack by almost one half.