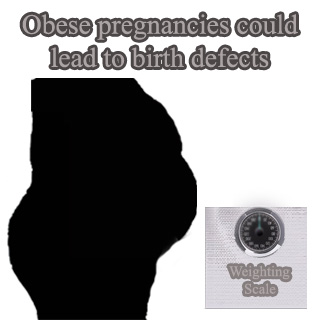 According to a new study, pregnancy of obese women could increase their yet-to-be-born babies’ risk of being born with certain abnormalities. These babies’ could be born with abnormalities like spina bifida. This study was conducted by the Newcastle University.

It is said that although this type of abnormality affects very few pregnancies; it could also result in disability. It is believed that obese pregnant women are relatively two times more likely to conceive a baby with spina bifida.

Study investigator, Dr. Judith Rankin, “Women who are thinking about trying for a baby need to check their own weight first and then think about seeking help if they are overweight. While you are pregnant it’s not the time to start a weight loss diet but it is more important to eat sensibly and healthily.”

The study investigators evaluated the findings of around 39 earlier conducted studies in order to gain an insight into this particular issue. They wanted to determine if an increased weight of the mother could in fact increase the risk of conceiving an infant with abnormalities. They discovered that obese women were more likely to conceive a child with neural tube defect. This defect could be traced to the child’s incomplete brain, spinal cord or protective covering development. It was further noticed that in the case of such defects, the risk of spina bifida was even higher.

Dr. Rankin says that, “This is the first time that so many studies have been combined to build a more accurate picture and it shows a link between a mother’s weight and many of these serious conditions in the newborn baby. Given that we are seeing an increase in the number of people who are overweight or obese, then we may see an increase in the number of babies born with abnormalities.”

Their findings are published in the academic journal JAMA.