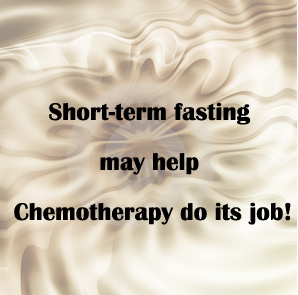 In a study conducted by the University of Southern California, researchers experimented with mice and concluded that fasting braces healthy cells but not cancer cells, and the experts are positive of the fact that such approaches could be used to improve cancer treatment.

In chemotherapy, certain drugs are administered to treat cancer. However, during the treatment, several side-effects are also noticed as along with the cancerous cells, the drugs also kill healthy cells and since long scientists have been seeking ways to augment the body’s defenses against the drugs.

The study, which was led by Dr. Valter Longo, discovered that a small duration of pasting prior to the chemotherapy session deprived healthy cells of oxygen, causing them to enter an emergency mode that made them highly resistant to stress. The research has been published on the internet in the current issue of the Proceedings of the National Academy of Sciences.

However, this did not stand true to cancer cells and when they were deprived of oxygen they became more vulnerable to drugs than the normal cells.

This literally means that more powerful and effective doses of cancer treatment could be used without harming patients.

The next step would be to test the results in humans. However, the experts warn that cancer patients should not starve themselves.

For the research, the mice which were injected with severe human tumors were given a potentially lethal dose of chemotherapy after two days of fasting, survived. However, half of the control mice, which had not fasted, died.

Through a lab experiment, the different resistance of normal human and human cancer cells to chemotherapy after a short period of starvation has already been established.

Furthermore, in a future trial the researchers are intending to examine whether a 48 hour starvation period is enough to produce defense, without the danger of making a patient too weak and even more sensitive to chemotherapy.

Longo has already applied for approval to run a clinical trial on cancer patients. He is currently also looking at ways to get the same shielding effects without actually fasting by using either a drug or a highly specific diet. The starvation response has already been shown to protect against stresses like heat shock, block the development of spontaneous tumors and guard liver cell death caused by acetaminophen.