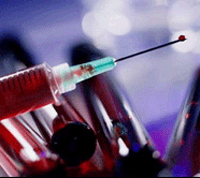 A simple blood test may help identify people with chronic asthma, scientists in the US have said.

Asthma is a disease of the lung. It is shown by chronic inflammation and structural changes in the airways symptoms that are severe in some patients and mild in others.

Researchers from the Yale University School of Medicine have identified a protein called YKL-40 in the blood, which they said plays a role in the disease. The scientists believe it might help identifying people with chronic asthma.

They found higher levels of YKL-40 in patients with asthma compared to those without the disease, reported health portal Medical News Today.

In addition, levels of this protein in the blood rose in cases of severe asthma or worsening lung function, the researchers found.

‘The results demonstrate that YKL-40 is significantly elevated in severe asthma,’ said Geoffrey Chupp, associate professor of medicine at Yale and the lead author of the study.