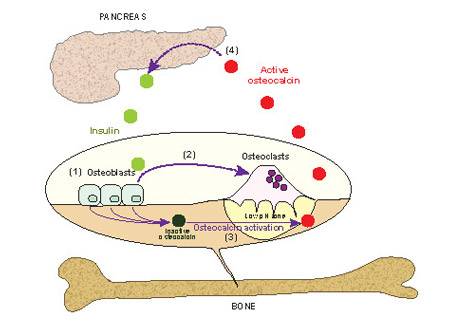 Scientists striving to determine a precise treatment for diabetes can possibly benefit from this tidbit. Experts from the Columbia University Medical Center claim blood sugar in the body to be controlled by bones. The findings can open doors to novel medications for type 2 diabetes. It was ascertained that the resorption process in which the old bone are destroyed during normal skeletal regrowth is crucial for a healthy level of glucose in the blood.

It is known that this process which enables new bone development occurs throughout the lifetime of an individual. The scientists mention that this process also stimulates dispensation of insulin into the bloodstream and enhances unacceptable reply of glucose by cells in the entire body. The research highlights alterations in skeleton to be a cause of diabetes in some people. Therefore, medications targeted to stimulate the bone-insulin pathway can possibly benefit patients with type 2 diabetes.

“Remarkably, insulin was discovered to favor bone resorption. Hence, in a feed-forward loop it favors the activation of osteocalcin, which in turn favors insulin synthesis and secretion. Insulin is a street-smart molecule that takes advantage of the functional interplay between bone resorption and osteocalcin, to turn-on the secretion and synthesis of more insulin,” commented Gerard Karsenty, MD, PhD, chair of the Department of Genetics and Development at Columbia University Medical Center.

Apparently on the discovery of osteocalcin to control glucose levels in 2007, investigators suggested the skeleton to play a major role in directing blood glucose. It is known that osteocalcin activates the production of insulin in the pancreas and upgrades the ability of other cells to accommodate glucose in them. The experts reveal that these processes are deteriorated in type 2 diabetes.

Dr. Karsenty enlightened, “This research has important implications for both diabetes and osteoporosis patients. First, this research shows that osteocalcin is involved in diabetes onset; secondly, bone may become a new target in the treatment of type 2 diabetes, the most frequent form of diabetes, as it appears to contribute strongly to glucose intolerance; and, finally, osteocalcin could become a treatment for type 2 diabetes.”

The latest research explains that only when cells impairing bone start working and initiate the resorption process, osteocalcin can work efficiently. On the degradation of bone by the cells, inactive osteocalcin may be transformed to its active form due to elevation in acidity around the bone. Cracking down the association between energy metabolism and skeleton physiology, as per this research insulin and osteocalcin, may unfold the physiological function of skeleton.

Dr. Karsenty added, “And for people with osteoporosis, the concern is that a common treatment, bisphosphonates – which work by inhibiting bone resorption and therefore may increase glucose intolerance, could push someone with borderline glucose intolerance into full-fledged disease onset. Although, more research is needed to research this further.”

The researchers spot light on the idea that diabetes can be treated by elevating the level of osteocalcin in the body. It has also been assumed that drugs recommended for treating osteoporosis prevents bone resorption. So it can possibly lessen the activation of osteocalcin and lead to glucose intolerance in some patients.

The research is published in the journal Cell.