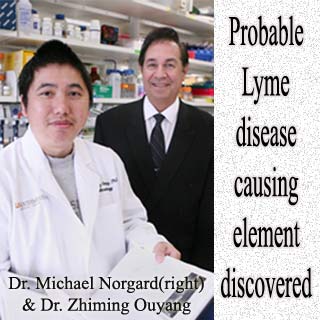 A latest research has identified the bacterial protein that is the culprit responsible for causing Lyme disease to become virulent. This research says that this protein is very crucial for the bacterium which gives the Lyme disease its virulent bite. This research was conducted by the researchers of the UT Southwestern Medical Center.

In the U.S, Lyme disease is said to be the most common tick-borne infection. The bacterium that gives birth to Lyme diseases, Borrelia burgdorfei, resides in the infected mammals and ticks. This bacterium gets transferred to human beings, through a bite from the infected tick. An infection that takes place as a result could cause malaise, fatigue, fever, muscle and joint aches, headache and “bull’s eye” rash which supposedly surround’s the primary area of infection.

It is further stated that in order to administer infection in the body, the bacterium has to gain various metal nutrients from its host. Prior to this research, it was not known that which metal transporter could be credited for this purpose, in the bacterium.

Senior author, Dr. Michael Norgard, chairman of microbiology, UT Southwestern, says that, “We believe our findings provide a foundation for further defining metal homeostasis in this human pathogen and may lead to new strategies for thwarting Lyme disease.”

Lead author, Dr. Zhiming Ouyang, postdoctoral researcher, UT Southwestern, says that, “Out of the thousands of bacteria known, the Lyme disease agent and only one or two other bacterial species do not require iron for growth. That raises the question as to what other metal co-factors the Lyme disease bacterium depends on to carry out the work that iron does for all these other biological systems. Our research suggests that manganese is a really important one.”

The researchers state that more research needs to be conducted in order to verify the exact process that the bacterium undergoes to become virulent. They further aim to gain better insight in the functionality of manganese in an organism.

Researchers from the Indiana University School of Medicine were also a part of this research team. The research was funded by the National Institute of Allergy and Infectious Diseases.

Their findings are present online and will be soon published in an upcoming issue of the Proceedings of the National Academy of Sciences.