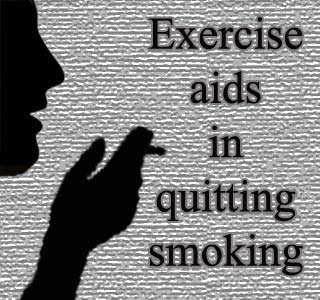 Innumerable techniques and methodologies have been implemented with the hope of reducing cigarette cravings in smokers. However, none of these methods could gain complete success in the long run. Now, a latest study has come up with another technique that may aid in reducing smokers cravings for cigarette. They state that physical exercise triggers a particular brain activity that may aid smokers overcome their nicotine cravings. This study was conducted by the researchers at the University of Exeter.

The study investigators viewed the way the smoker’s brain processes cigarette images after exercise, with the help of functional magnetic resonance imaging. Ten regular smokers were asked to cycle for about 10 minutes, after going without a cigarette for 15 hours. Following this, they were given an fMRI scan while being shown some images featuring cigarettes, which would normally generate nicotine cravings in a smoker. These smokers were again shown the same cigarette images minus any physical activity prior to it. The subjects were asked to note down their responses during both the phases of the study.

Lead author of the paper, Kate Janse Van Rensburg, a PhD student, University of Exeter, says that, “Our findings add to a growing body of evidence suggesting that exercise can help people give up smoking. This strengthens the argument that moderate exercise could be a viable alternative to many of the pharmaceutical products, such as nicotine patches, for people who want to give up smoking. A ten or fifteen minute walk, jog or cycle when times get tough could help a smoker kick the habit. There are of course many other benefits from a more active lifestyle including better fitness, weight loss and improved mood.”

The reason behind the ability of physical activity to reduce smokers’ cravings for nicotine is not clearly known. The study investigators hypothesize that exercise enhances an individual’s mood, which reduces their dependence on nicotine dosage. Another suggestion is that exercise generates blood flow to certain parts of the brain which are not very involved in anticipation of reward on viewing the cigarette images.

Their findings are published in the Psychopharmacology journal.