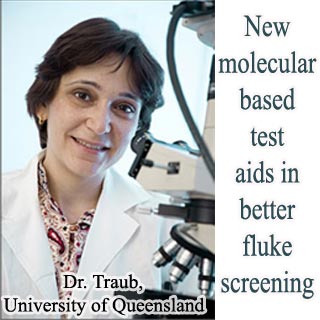 Fatal liver and intestinal flukes can be credited for plaguing the lives of about 9 million people in Southeast Asia, on an average. The consumption of raw fish permits the entry of these flukes in the human digestive tract. The existing testing methods for fluke identification consist of a process where individuals are asked to painfully flush out fully grown flukes. However, since the newly developed screening method is non-invasive, any feeling of pain experienced during testing has been eliminated.

These researchers developed this new testing method after conducting a field work in Thailand. Dr. Rebecca Traub and Dr. Julie Macaranas from the School of Veterinary Science, University of Queensland, jointly developed this test. These researchers, through this screening method tested the samples of more than 300 villagers in a remote village near Bangkok.

Dr. Traub says that, “Multi-disciplinary research teams engaged in public health research are increasingly adopting a ‘One Medicine’ approach involving medical doctors, veterinarians and biologists. This is the most effective way of tackling the understanding and control of such diseases.”

It is said that the Thai researchers are already using this innovative screening methodology to screen people for potential traces of three species of liver and intestinal flukes. The length of these species can vary from about a few millimeters to about one centimeter. This particular test is said to be capable of precisely identifying a certain species of gene from out of a pile of innumerable other genes in a single faecal sample.

The researchers believe that their breakthrough research is of importance because about 70 percent of the infectious diseases evolving globally involve an animal source or host. It is also said that, these leaf-shaped flukes can even lead to bile duct cancer, or formation of stones in the bile duct, which in turn may lead to fatal liver diseases.

This research was funded by an Australian Research Council Linkage grant along with Bayer Animal Health GmbH as an industry partner. These researchers hope to gain further funding for taking their research to the next level.