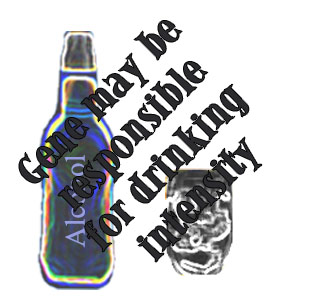 According to a new research, strong evidence may exist of the relationship between a serotonin transporter gene and drinking intensity among those who are alcohol-dependent. In this research, the reason why some people who are alcohol-dependent drink more heavily than others is said to have been clarified. This research was conducted by the University of Virginia Health System.

The research is said to have evaluated the connection between the six different DNA sequence variations of the serotonin transporter gene with the level of drinking intensity in the subjects. This evaluation was stated to have been undertaken in more than 250 people who were presently being treated for their dependence on alcohol. it has been stated that the measurement of the amount of alcohol that a person consumes each day is said to be known as drinking intensity.

Ming D. Li, professor of psychiatry and neurobehavioral sciences in the University of Virginia’s School of Medicine has stated that one of the six variants scrutinized in the research, have demonstrated a major link with drinking intensity.

Previous analyses on the topic are said to have revealed that the neuro-chemical serotonin may intervene with the rewarding effects of alcohol. It is thus presumed to be an important contributor leading to alcohol abuse. Earlier evaluations are said to have also revealed that alcohol preference and consumption may be influenced by the brain’s serotonin system.

Dr. Bankole Johnson, chairman of the Department of Psychiatry and Neurobehavioral Sciences in the School of Medicine, says that, “Acute drinking increases serotonin release and signaling in brain regions involved in controlling consumption of alcohol. But chronic drinking reduces serotonergic function, leading to a serotonin-deficient state. One hypothesis is that alcoholics drink to alleviate this serotonin-deficient state. But it’s important to remember that alcoholics differ significantly in their drinking patterns, social backgrounds and disease etiology. All of these factors may affect both treatment outcomes and medical complications resulting from heavy drinking.”

The researchers have stated that reducing the intensity of drinking is one of the main aims of treatment. It may be possible to sub-type those who are alcohol-dependent with the use of a known genetic marker. It has further being stated that treatment methods which may aim at specific underlying molecular mechanisms may also be better determined using the same genetic marker. The researchers hope that they may be able to successfully verify whether this specific gene may be able to foretell the treatment outcome for various serotonin agents.

These findings are presented in the journal Alcoholism: Clinical and Experimental Research.