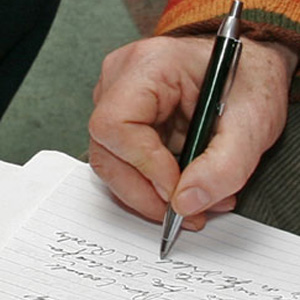 A study has found that writing ones innermost thought and pouring out their feelings could change the thoughts and feelings of cancer patients about their disease.

The study said that cancer patients who underwent writing therapy reported changes in thoughts about their illness. This tended to improve the physical quality of their life.

For this the researchers conducted three to five writing sessions in a controlled laboratory setting. The results showed a positive impact on cancer patients in just one writing session.

According to study leader Nancy Morgan, previous researchers had already suggested that expressive writing may enhance physical and psychological well-being on the concerned person.

Now this study conducted by Morgan and her colleagues included a pre-writing survey, 20 minutes of expressive writing, a post-writing survey and an optional follow-up survey that was completed by telephone three weeks later.

To analyze the impact of the writing exercise on patients, the researchers conducted initial content analyses of the compositions, examining each text for themes, words, and phrases indicative of the transformative nature of the cancer experience.

One patient wrote, ”Don’t get me wrong, cancer isn’t a gift, it just showed me what the gifts in my life are.”

When people used a greater number of positive emotion words in their writing, they also reported more change in how the writing affected their thoughts and feelings about the illness, the researcher said.

Of the 63 texts, 60 contained evidence of transformation brought about by the cancer experience. Many of the changes expressed in the writing were positive and related to feelings about family, spirituality, work, and the future.