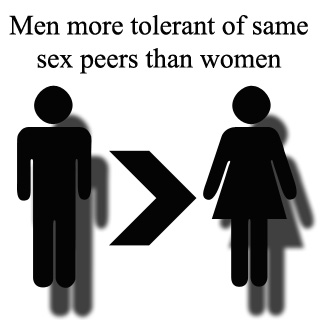 Women are usually perceived as the ones who are more social and cooperative as compared to men. However, a latest study says otherwise. This study states that men are actually the ones who can maintain a larger social network as compared to women. This study was conducted by the researchers at the Harvard University and the Universite du Quebec a Montreal.

The aim of these researchers was to gauge the tolerance level of both men and women towards their same-sex peers. Thus, the researchers asked both male and female college students to complete surveys about their behavior and relationship with their room mates. The findings revealed that men rated their room mates as being more satisfactory and less bothersome than their female counterparts in the study. It was also discovered that women were more likely to change their room partners as compared to the men.

The study investigators state that, “At the most primitive level, females may have lower thresholds than males for sensing negative visual, auditory, or olfactory information in unrelated same-sex individuals,” They continue that, “Females may simply weight negative information more heavily than males do, because negative information disrupts the establishment of intimacy, which serves a more important function in same-sex relationships for females than for males.”

In addition to this, another experiment was also being conducted on the side. In this experiment the subjects read a story, where the protagonist’s best friend was characterized as being a very reliable person, until one day proven otherwise. After reading this story, the study subjects were asked to rate the reliability of their best friend. It was again noticed that, men were more likely to rate their same-sex friends as more reliable, as compared to women.

The investigators state that gender differences in the tolerance level may mainly rely on the expectations and trust that same-sex friendships may have for both men and women. They also state that the amount of effort one puts in to same-sex friendship could also depend on the short and long term need at that particular phase of life. However, the researchers also point out that their definition of tolerance may be restricted to certain points, and a deeper analysis needs to be conducted before they reach a concrete conclusion.