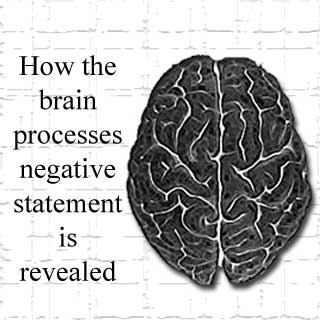 In our daily routine life, we have to face various types of positive as well as negative statements. Based on the previously learnt sentences, we can make out the difference and categorize these new statements as either true or false. Earlier researches on the issue have stated that the inclusion of negative words in the middle of a statement makes it harder for the brain to interpret the sentence.

Thus, a new study was conducted with the aim of evaluating how negative statements are processed in the brain. This study was conducted by Mante S. Nieuwland and Gina R. Kuperberg, psychologists from the Tufts University. In this study, the participants were asked to read out statements consisting critical, mid-sentence words which made the sentences either true or false.

While the participants read out these sentences, the researchers gauged their event related potential responses, or ERPs. This is an electrically measured brain response, which is the result of any thought or perception. Such ERP studies have earlier been used to gain additional knowledge about the way the brain processes language, way before any physical behavior is noticed.

The participants of this particular study read out statements that were either pragmatically licensed or pragmatically unlicensed. Pragmatically licensed statements like, “In moderation, drinking red wine isn’t bad for your health,” are informative and easy to understand. On the other hand, pragmatically unlicensed statements like, “Vitamins and proteins aren’t very bad for your health,” seem unnatural and not helpful. The latter statement is unlicensed because it states that vitamins and proteins may be bad for an individual’s health, which isn’t true. Here, the use of the negative word makes the statement insignificant and not very useful.

The obtained results stated that the way the brain processes a negative statement depends on the sentence structure itself. It was discovered that when faced with an untrue statement, a greater brain activity was noticed. However, the level of brain activity remained the same throughout the pragmatically unlicensed statements.