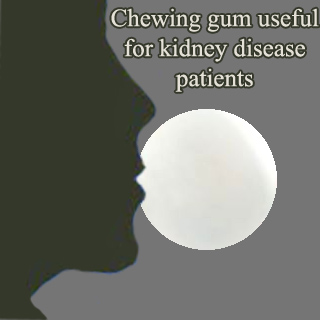 A latest study states that chewing a certain type of gum can possibly aid in treating high phosphate levels in dialysis patients with chronic kidney disease. It is stated that these chewing gums, made with a phosphate-binding ingredient, could help in maintaining proper phosphate levels in such patients, and also prevent the onset of heart diseases.

The condition of high levels of phosphate in the blood, known as hyperphosphatemia, generally takes place in chronic kidney disease patients on dialysis. The intake of various drugs with the aim of reducing the phosphate level in one’s diet, sometimes remain unsuccessful in bringing about the desired result. The saliva of such patients is also said to contain high levels of phosphate. Thus the study investigators wanted to determine if binding of the salivary phosphate during periods of fasting and the use of phosphate binders with meals, could bring about a positive effect in such patients.

The study was conducted by Vincenzo Savica, MD, of the University of Messina, along with Lorenzo A. Calò, MD, PhD, of the University of Padova, Italy, and colleagues. They assessed about 13 dialysis patients with high blood phosphate levels, for the purpose of this study. These patients, along with continuing their prescribed phosphate-binding regime, were also asked to chew 20 mg of phosphate-binding chewing gum twice a day between meals, for a period of 14 days.

Through this study, these researchers hint at the use of such chewing gums in chronic kidney disease patients with the aim of reducing their phosphate levels. However, they also state that their study findings further need to be confirmed in a randomized, double blind, placebo controlled study conducted on a larger group of patients.

Their findings are present online and will soon be published in the March 2009 issue of the Journal of the American Society Nephrology.