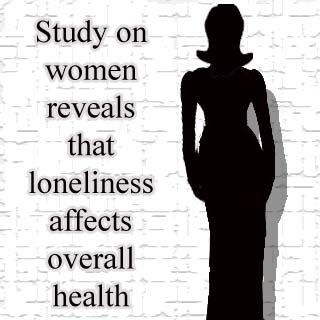 According to a latest study, social isolation or loneliness has adverse effects on the mind and body of an individual. Isolation also brings about an increase in a person’s blood pressure and stress levels. This study was conducted by the researchers of the University of Chicago.

It is said that social isolation may lead to the development of Alzheimer’s disease. It can also alter a person’s control over their life-style, which may prompt them to follow an unhealthy lifestyle, which may in turn have adverse long term effects. Loneliness affects the immune system, and also raises the hormone cortisol levels and elevates blood pressure to a degree which could also result in heart attack and strokes.

John Cacioppo, the Tiffany and Margaret Blake Professor in Psychology at the University, says that, “Given their feelings of social isolation, lonely individuals may be left to find relative comfort in nonsocial rewards.”

About 23 female subjects were tested to determine their loneliness level or social behavior. While scanning their brains with functional magnetic resonance imaging, they were shown pleasant images such as happy people and unpleasant images like human conflicts. This is said to be the first research to have used scans to study the link between loneliness and brain activity.

It was noticed that the women who rated themselves as lonely were least likely to have high activity in their ventral striata, a part of their brain that deals with rewards, when shown images of happy people. On the contrary, an increased activity was noticed in the same part of the brain of non-lonely people on viewing the same images. On comparing the health of lonely people with socially active people, the researchers say a difference as big as that between a smoker and a non-smoker or an obese person and a normal weight person was noticed.

These findings were presented at the annual meeting of the American Association for the Advancement of Science. The findings are also published in the Journal of Cognitive Neuroscience issue.