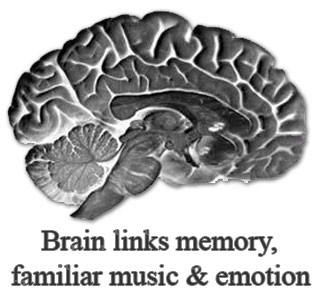 A new study has attempted to discover, that why do listening to certain songs bring back past memories in people. It was discovered that the part of the brain which stores past memories, also serves as a hub which links familiar music, memories and emotions. This study was conducted by the University of California Davis investigators.

The investigators state that their study findings could help better explain why music can have a strong effect on people suffering from Alzheimer’s disease. The hub is located in the medial prefrontal cortex region of the brain.

Study author, Petr Janata, associate professor of psychology at Center for Mind and Brain, University of California Davis, says that, “What seems to happen is that a piece of familiar music serves as a soundtrack for a mental movie that starts playing in our head. It calls back memories of a particular person or place, and you might all of a sudden see that person’s face in your mind’s eye. Now we can see the association between those two things — the music and the memories.”

The brain activity of around 13 students was scanned through functional magnetic resonance, while they listened to about 30 different songs. After listening to each song the subjects were questioned on whether they were familiar with that song, or was the song linked with any particular incident or memory, or was it an enjoyable song according to them, etc. The subjects were also asked to fill out a survey immediately after their scanning, about the content and vividness of the memories that each song had stimulated in them.

Since memory is restricted to a certain extent in Alzheimer patients, Janata says that he hopes to use his findings to soon develop music-based therapy for such people. He also says that providing Alzheimer patients with music players and customized play lists could be a cost effective and efficient mode of treatment.

These findings are published online in the Cerebral Cortex journal, and will soon be published in the journal’s print version as well.