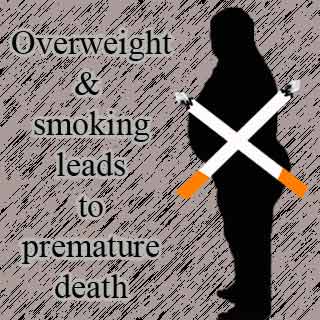 According to a new study, overweight teenagers face the same risk of premature death as people who are heavy smokers. The highest risk was noticed in people who were both overweight and smoked more than 10 cigarettes a day. This study was conducted by Karolinska Institutet.

Smoking and obesity are the two main risk factors for premature death. However, it was apparently not known that in unison these factors add to the risk of death. The study investigators followed more than 45,000 men in Sweden aged 18 on an average. All these men were conscripted into military services, and their body mass index and smoking habits were also noted. These men were followed for a period of about 38 years. During this period of time, it is said that more than about 2,500 of them died. It was discovered that men who smoked and were obese in adolescence were five times more likely to die earlier than their non-smoking peers having a normal weight.

The study was led by Dr. Martin Neovius, at the Department of Medicine, Solna. He says that, “This means that being overweight or obese at the age of 18 increases the risk of premature death, regardless of smoking status.”

It was also noticed that the ones who were merely overweight also faced the risk of premature death. In contrast to this, the underweight people also were more likely to face early death in adulthood. It is said that the people who smoked lesser than 10 cigarettes per day were about a third more likely to die young as compared to the slimmer non-smokers. The normal weight people had the lowest risk of dying of a premature death.

The study investigators conclude that obesity, smoking and overweight in adolescents should be considered one of the main areas targeted for strong public health initiatives.

Their findings are published online in the British Medical Journal.