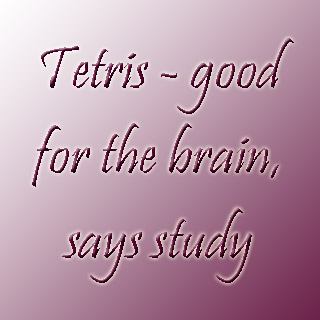 Who thought that playing a particular computer game may possibly increase brain efficiency? Well, experts at the Mind Research Network declared the findings of a scientific study that apparently used brain imaging and Tetris to probe whether practice makes the brain efficient as it supposedly increases gray matter.

Dr. Rex Jung, a co-investigator on the Tetris study and a clinical neuropsychologist, commented, “One of the most surprising findings of brain research in the last five years was that juggling practice increased gray matter in the motor areas of the brain. We did our Tetris study to see if mental practice increased cortical thickness, a sign of more gray matter. If it did, it could be an explanation for why previous studies have shown that mental practice increases brain efficiency. More gray matter in an area could mean that the area would not need to work as hard during Tetris play.”

Dr. Sherif Karama, a co-investigator at the Montreal Neurological Institute, added, “We showed that practice on a challenging visuospatial task has an impact on the structure of the cortex, which is in keeping with a growing body of scientific evidence showing that the brain can change with stimulation and is in striking contrast with the pervasive and only-recently outmoded belief that our brain’s structure is fixed.”

This study claims to be the one of the first to examine the effects of practice in the brain via two imaging techniques. The girls apparently finished both structural and functional MRI scans prior to and post the three-month practice period, as did girls in the control group who did not play Tetris. A structural MRI was used to supposedly evaluate cortical thickness, and a functional MRI was apparently used to assess efficient activity.

Dr. Richard Haier, a co-investigator in the study, commented, “We were excited to spot cortical thickness differences between the girls that practiced Tetris and those that did not. But it was surprising that these changes were not where they saw more efficiency. How a thicker cortex and increased brain efficiency are related remains a mystery.”

The regions of the brain that displayed comparatively thicker cortex were claimed to be the Brodmann Area (BA) 6 in the left frontal lobe and BA 22 and BA 38 in the left temporal lobe. Experts are of the opinion that BA 6 supposedly plays a part in the planning of complex, coordinated movements. BA 22 and BA 38 are said to be the part of the brain active in multisensory integration or our brain’s coordination of visual, tactile, auditory, and internal physiological information.

Functional MRI (fMRI) supposedly demonstrated better efficiency after practice mostly in the right frontal and parietal lobes including BAs 32, 6, 8, 9, 46 and BA 40. These regions may be linked with critical thinking, reasoning, and language and processing. Tetris was a helpful tool for brain analysis, as per the study experts. Tetris has also been used by several earlier scientific studies.

Haier mentioned, “Tetris, for the brain, is quite complex. It requires many cognitive processes like attention, hand/eye co-ordination, memory and visual spatial problem solving all working together very quickly. It’s not surprising that we see changes throughout the brain.”

Dr. Jung remarked, “We hope to continue this work with larger, more diverse samples to investigate whether the brain changes we measured revert back when subjects stop playing Tetris. Similarly, we are interested if the skills learned in Tetris, and the associated brain changes, transfer to other cognitive areas such as working memory, processing speed, or spatial reason.”

Girls were chosen over boys for this study by the experts, because it was more likely to see changes in the developing brains in girls. This is because boys may have an extensive understanding of computer games and thus may not show detectable brain change after game practice. Limited computer game experience was supposedly seen in all the 26 girls in the study.

This study was published in the September issue of the journal BMC Research Notes.