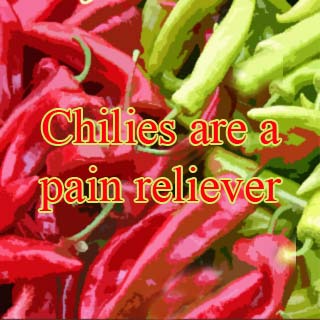 Scientists state that the same compound which gives chili pepper its fiery flavor can be used to relieve muscle and joint pain. The capsaicin compounds in chilies give a burning sensation when they come in contact with any sensitive area of the body. This study was conducted by the University of Buffalo.

Capsaicin creams are said to be a natural pain-relieving folk medicine, which are useful for healing a number of body pains, like muscle or joint ache, arthritis, neuropathic pain, etc. Such creams are usually sold over the counter and are widely used.

Scientists have now traced the analgesic effects of capsaicin to the PIP2 lipid in the cell membranes. Feng Qin, PhD, associate professor in the Department of Physiology and Biophysics at the University at Buffalo School of Medicine, says that, “The receptor acts like a gate to the neurons. When stimulated it opens, letting outside calcium enter the cells until the receptor shuts down, a process called desensitization. The analgesic action of capsaicin is believed to involve this desensitization process. However, how the entry of calcium leads to the loss of sensitivity of the neurons was not clear.”

They further discovered that the receptors are still fully functional even after desensitization. Qin explains, “What changed was the responsiveness threshold. In other words, the receptor had not desensitized per se, but its responsiveness range was shifted. This property, called adaptation, would allow the receptor to continuously respond to varying stimuli over a large capsaicin concentration range.”

It is believed that these findings could lead to the development of other pain-relieving treatments that ease pain without first causing irritation.

The study was co-authored by Jing Yao, PhD, a post-doctoral research student in the University of Buffalo Department of Physiology and Biophysics. The study was supported by a grant from the National Institutes of Health.

Their findings appear online in the journal PLoS Biology.