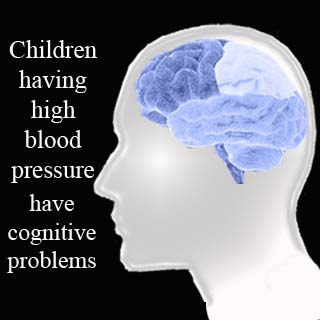 A latest study says that children with hypertension are less competent in goal-directed assignments as compared to their counterparts who don’t have high blood pressure. The study also points out that obesity and hypertension, in unison can lead to depression and anxiety. This study was conducted by the University of Rochester Medical Center.

High blood pressure in adults can cause cardiovascular diseases, stroke, heart attack, kidney failure, etc. The study findings can be of great help to parents and physicians in identifying symptoms, diagnosing and treating hypertension in children. Especially when there is an increase in the number of obese children having high blood pressure, and also there is an increasing pressure on children to perform better in both, education and in continued development. It is stated that about 10 percent of obese children suffer from hypertension.

“These results were very surprising to me, despite similar findings in adults. Adults with hypertension often have other problems that might affect cognition such as chronic disease, smoking or alcohol use. However, children with hypertension usually do not have these co-morbidities,” says Study author, Marc Lande, MD, pediatric nephrologist, Golosano Children’s Hospital, University of Rochester Medical Center.

Lande states that children with high blood pressure have more working memory problems and fare lesser at goal-oriented tasks as compared to their counterparts without hypertension. He further says that such cognitive changes could lead to hypertensive damage to their brain, which in the long run could have adverse effects.

They state that the long term effects that these small changes may bring about are not yet known. However the capability of such changes to alter cognitive ability may urge further studies to be conducted on the issue.

Their findings are published in the Journal of Pediatrics.