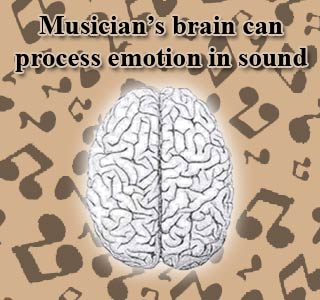 A new study may suggest a potential mate for those people who are looking for someone who can even pick up their subtle emotional cues. They state that musicians may fit this description very aptly. They state that the brain of musicians has the capability of identifying even a subtle emotion in sound. This study was conducted by the Northwestern University.

It is said that this interdisciplinary team has for the first time provided biological evidence that musical training improves a person’s capability to identify emotion in sound. The study investigators state that age-wise the sooner these musicians started their music studies, in addition to the higher number of years of musical experience they had, added to their ability to process emotion in sound.

To be certain of their findings they measured the brainstem processing of three acoustic correlates (pitch, timing and timbre) in both musicians and non-musicians. It was discovered that the musicians, who were accustomed of using all their senses in performing a musical piece, had “finely tuned” auditory systems.

Primary study author, Dana Strait, doctoral student in the Henry and Leigh Bienen School of Music and a researcher in the Auditory Neuroscience Laboratory, says that, “That their brains respond more quickly and accurately than the brains of non-musicians is something we’d expect to translate into the perception of emotion in other settings.”

Study co-author, Richard Ashley, associate professor of music cognition, says that, “Previous research has indicated that musicians demonstrate greater sensitivity to the nuances of emotion in speech.” In one of his recent studies, Ashley even states that musicians may be able to process emotion in sounds even after hearing them for only about 50 milliseconds.

The study authors pointed out that the acoustic elements that the musicians effectively process are similar to the ones that the children with language disorder have difficulty encoding. This hints at the possibility of developing new musical approaches for the treatment of people suffering from this disorder.

Their findings are published in the European Journal of Neuroscience issue.